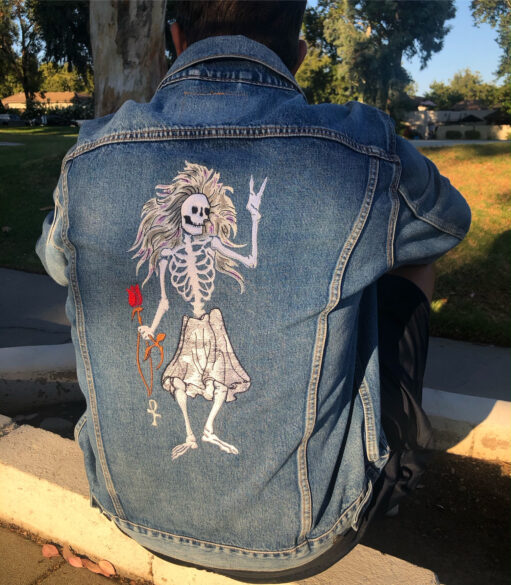 Pictured in Stonewash. Standard fit. Available in several other fabrics. Please email info@wovenfree.com for photos of the available fabrics.

The backstory of the Skeleton Saint…80’s Grateful Dead was in full effect delivering tons of bliss to deadheads all over the world. Tiger had become an extension of Jerry’s hand & Doug was commissioned to build him another instrument. This next guitar had to be extra special. It was to play off the design concepts that made Tiger so special to Jerry, but also expand upon its tonal capabilities. So Doug got to work, making the overall body weight slightly lighter than Tiger, along with a couple electronics mods. The MIDI system installed in Rosebud would offer Jerry the ability to play the trumpet or even the flute through his guitar.

Only one thing was left to be imagined, and it turned out to be Doug’s masterpiece. He knew what Jerry liked. Doug sketched Rosebud from scratch & inlayed it by hand manually w/ a vintage jewelers saw, as he had always done. And when Jerry first opened the case to reveal the instrument, as Doug recalls w/ a proud gesture…he was quite pleased. He named her Rosebud right then & there.