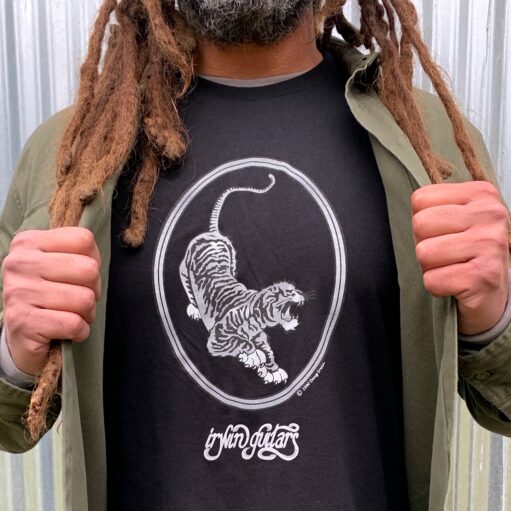 70’s Dead was in full effect bringing great adventure to an underground emerging group of deadheads all over the world. Wolf had become an extension of Jerry’s hand & Doug was commissioned to build another instrument in ’73. This next guitar had to be different, pushing past the limits of Wolf. Doug knew it was time to innovate once again. He had drawn body/horn shapes while at Alembic that Rick Turner famously referred to as ‘hitchhiker thumbs’. Doug got to work putting the pieces together…

He asked Jerry if there was anything special he wanted inlayed. Jerry replied with ‘I like fish’. Doug ended up going on a flash of inspiration…drawing the iconic Tiger from scratch. Using his original jewelers saw and a select piece of ‘mother of pearl’ Doug hand cut each piece for the inlay. One of the things that made their relationship so uniquely special is that Jerry let Doug do whatever he felt. He trusted Doug implicitly, telling Doug ‘don’t hold back’. That trust empowered Doug to be at his creative best. He never let Jerry down. And Jerry never let us down.

Doug delivered Tiger in late ’79 and it became an immediate staple for Jerry, ultimately shaping the 80’s GD sound. The instrument was an extension of Jerry’s hand for over a decade straight, until ’90, when whispers of Rosey starting emanating from the heavens…